From road signs to computer keyboards, from the displays of household appliances to the washing labels on our clothes, pictograms surround us on a daily basis, and we often decipher them without thinking about it.

From road signs to computer keyboards, from the displays of household appliances to the washing labels on our clothes, pictograms surround us on a daily basis, and we often decipher them without thinking about it.

Some pictograms have been polished by time, and by centuries of use. Others come fresh from the minds of graphic designers who have carefully drawn each line to deliver the perfect message. What they all have in common is the ability to represent a complex object in a few simple lines.
Draw a square and a triangle, and you have a house. Add a few lines to a circle and you've got the sun. Pictograms convey meaning through their resemblance to physical objects. They differ in this sense from ideograms, which are supposed to represent ideas or concepts. Languages have developed over thousands of years using both types of symbols, and until today they can be used either separately or in combination. Let's take a closer look at the label on your coat. You may find the pictogram of a washing tub, the ideogram of dry cleaning, and a combination of the pictogram of the washing tub and the ideogram of the cross to give you an instruction (do not wash). Now that we have sorted out the terminology, let's dive into the birth of pictograms.

On Hieroglyphs and Ancient Writing 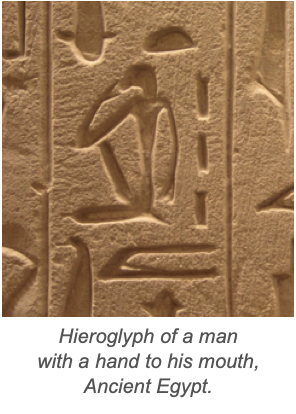 The fact that cave art in the prehistoric ages can be regarded as pictographs is the subject of discussion. However, we can date with certainty the use of pictograms in a writing system to 3500 BC, with the creation of the Sumerian Cuneiform, and later on, with the hieroglyphic system (3200 BC). Hieroglyphics are fascinating because they follow four principles of writing at the same time. First of all, they are pictograms, which represent exactly what they describe. In tombs, you will often find pictograms of food, or slaves, intended to replace the offerings made by the living to the dead, with a magical element. The hieroglyph of a man with a hand to his mouth represents in this context the deceased eating. Secondly, they are ideograms, silence, for example, is represented by the same pictogram of a man with his hand to his mouth. Thirdly, it is a phonetic system, in which the signs are also used to represent words with the same consonants. Finally, it is a rebus system, where each hieroglyph represents a sound that is combined with the next.

From Sumerian Cuneiform (3500BC/2nd century AD) to Mayan script (3rd Century BC/16th century AD), most ancient kinds of writings have met the same complexifica-tion of initial pictograms. Later on, with the apparition of alphabets, like the Greek, or the Hebrew one, the writing system would become completely phonetical. However, pictography, or the use of pictograms as a language, were meant to come back a few millennia later.

On The Creation Of Modern Infographics And Toilet Signs

“ISOTYPE combined use of pictograms and graphics
was quite revolutionary and paved the way for infographics
as we know them today.”

German and Austrian thinkers Marie Neurath (1898-1986) and Otto Neurath (1882 - 1945) were central figures in the Circle of Vienna and shared a common mission of popularising science. They wrote several children's books explaining scientific phe-nomena and worked to make statistical, economic and political information accessible to the public.

In the 1930s, convinced that images were the best way to make data understandable to the masses, they created a syllabus of drawings to symbolise information of an industrial, demographic, political or economic nature. This system was later called ISOTYPE (International System Of TYpographic Picture Education). The atlas Gesellschaft und Wirtschaft (Society and Economy) is one of the best examples of this work. Commissionned in 1930 by the Bibliographisches Institut in Leipzig, the atlas is a large-format (30×45 cm) folder containing 130 plates, 98 of which display maps and charts relating to topics such as history, migrations, economics, urbanism, etc. The symbols used in all plates were designed by the Neuraths, together with German graphic designer Gerd Antz.

Two plates extracted from Atlas "Gesellschaft und Wirtschaft",
1930, and entitled "employed by people by activity around 1920" and "war casualties".

When ISOTYPE was created, the use of graphics had already experienced several decades of development among researchers as a means of transmitting information. However, ISOTYPE combined use of pictograms and graphics was quite revolutionary and paved the way for infographics as we know them today.

The ISOTYPE certainly served as an inspiration to Japanese officials during the preparation of the 1964 Tokyo Olympic Games, when they were faced with the challenge of informing an international and heterogeneous public with simple means. Under the direction of Masaru Katzumie, more than thirty young designers created 20 symbols for the different sports categories and 39 general information panels, creating the first set of pictograms used in real-life situations, and also the first toilet signs in history. It is important to note that pictograms are not frozen in time, but are constantly evolving, as our comparison of Olympic Games pictograms over time shows.

On the Language of Pictograms 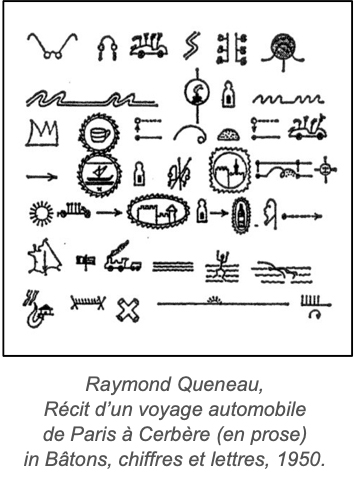 Both written language and pictograms use complex signs to convey meaning. However, at first glance, it seems difficult for pictograms to create a complete narrative se-quence, which is the main purpose of language. One can think of the experiences of the French novelist Raymond Queneau (1902-1976), who made several attempts to do so. The result is certainly poetic, resembling visual haikus. However, all Queneau's experiments had to be accompanied by written explanations in order to be understood. But if pictograms are not a language, how can we explain the success of projects such as the Blissymbols, which have been used by people with all kinds of physical and cognitive disabilities?

The first thing to bear in mind is that, like written language, pictography also requires learning. The simplest example that comes to mind is road signs.

to clarify their meaning.”

Semioticians in fact consider pictograms as modes of representation (or signs) having a structure (syntax), a meaning (semantics) and a use (pragmatics). Like any other type of language, iconic languages have a grammatical structure. Like written language, pictograms are polysemic. Just as the word "arm" can mean either a limb or a tool of war, the pictogram of a tree can mean "forest" on a country road sign and "wood" on a packet of paper.

Pictograms rely on context, perhaps more than words, to clarify their meaning. Take the example of the toilet sign. Before 1964, no one had used it, and a drawing of a woman and a man was just that, a drawing of a man and a woman. However, given its context, people understood that the signs were there to indicate which toilet was for men and which was for women. Gradually the sign became used and known all over the world, and today a sign with both a woman's and a man's pictograms has acquired a primary meaning of toilet location.

On the Responsibility of Creating Icons

To create an effective pictogram, three phases are necessary: semiotic research, picto-gram design and testing. According to the Cambridge Dictionary, semiotics is "the study of signs and symbols, their meaning and use". Semiotic research aims to find the key elements that signify an object. The sun, for example, is defined by its round shape and the rays of light emanating from it. A teacher is represented graphically by a figure and the board he or she uses to teach, and so on. Designing a pictogram means display-ing these elements as completely as possible, avoiding interference as much as possi-ble. The trial is just as critical a phase as the other two and should not be forgotten.


“Because creating pictograms means representing the world around us, this act carries a strong social responsibility.”

When creating public signs for example, strict protocols are used. According to the ISO standard, symbols need to be displayed to a random test group. A symbol is ac-cepted if 67% of the users understand it in an unquestionable way or almost (ISO 9186-1989). In the United States, the pictogram must be understood by 85% of the us-ers in order to be standardized (ANSI Z535-1987).

Because creating pictograms means representing the world around us, this act carries a strong social responsibility. According to Sofya Polyakov, CEO of the Noun project - a website hosting the largest collection of visual language in the world, well known to graphic designers and used by almost 7 million people - “Visual language has the power to shape, reinforce, and change our perceptions about the world. Symbols are some of the best universal tools to overcome language and cultural communication barriers, and it’s more important than ever that they communicate in a socially con-scious way.”

Project on Keaykolour
for Busca Idrac architecture
agency by Agence’O.

A firm believer in the social impact of icons and representation, Sofya Polyakov led the initiative “Redefining Women”, which aims to combat stereotypical representa-tions of women in the workplace. As Sofya Polyakov explains “when you search the web for images related to words like “entrepreneur,” “leader,” and “boss,” the majority of results are images of men”. The collection of over 60 icons prominently features women in design, technology and leadership positions

From prehistoric caves to 21st century social issues, pictograms have found a way to be both universal and in tune with the times. It is difficult not to feel linked to an ancient civilisation when you discover a glyph representing something as common as bread. Those who have had the experience of being abroad and relying on rudimentary drawings to communicate can certainly testify to the universality of the language of pictograms. Millennia after the Egyp-tians and the Mayans created their glyphs, we are coming full circle by creating a new type of pictograph, intended to include all humanity in a globalized time.